Our title winning campaign started on Sunday 10th September 2017 with an impressive 7-1 win over Club Doncaster Titans and a 4-1 win over Wisewood. Throughout the season we put in some great performances to challenge the toughest teams in the league. The lads played 10 games this season, scoring 33 goals in total and only losing 2 games.

It all came down to the last two games of the season, with us and Derek Dooley on the same points going into the final set of fixtures. We managed to secure a 2-1 win over Doncaster Communication College which was a very close game and then it was all down to the final game of the season vs City Knights.City Knights had just won 1-0 against Derek Dooley in the previous game, which meant we needed to gain 3 points from City Knights to win the league on goal difference.

The must win game for Rotherham United started off very close and the score line was 0-0 for the first 20 minutes, with the City Knights keeper pulling off some impressive saves. It went down to the final few minutes, where James Hammond broke through and scored to make it 1-0. The final whistle went and thanks to James Hammond’s last minute goal, Rotherham United were crowned Premiership champions of the South Yorkshire Ability Counts League.

We would like to congratulate Mickey Parkes, Connor Worrall, Keith Parker, Danny Grubb, Kyle Reid, James Hammond, Callum Majer, Chris Flanaghan, and Chris Sanderson for a fantastic season and thank them for their continued effort in training and matches.

If you would like to be a part of our ability counts football, please contact Jack Pitchford at jpitchford@rotherhamunited.net or 01709 827767. 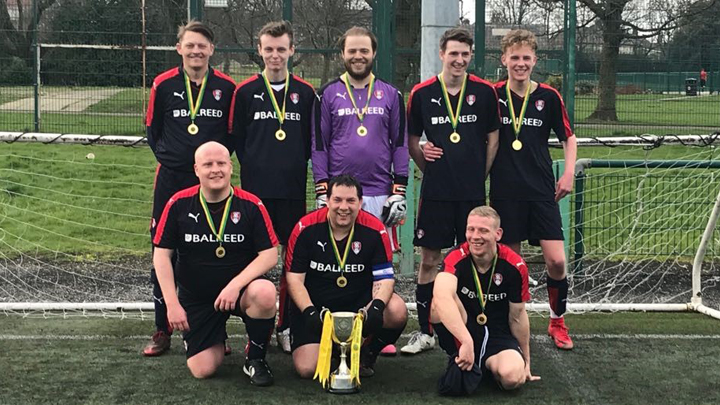