All 72 EFL Clubs will come together to highlight the work undertaken to tackle some of society’s biggest issues for the EFL’s Day of Action 2019.

On Tuesday 19 March, EFL Clubs across the Sky Bet Championship, League One and League Two will each host events designed to showcase the very best of their work to tackle a diverse range of social issues, from homelessness and mental health, to community cohesion and the battle against plastic
pollution.

As part of the milestone day in the calendar, Rotherham United will be releasing their Community Takeover Day video, which saw a number of children from the local area appointed to roles to shadow key departments at the club for the recent game with Blackburn Rovers.

Even first team boss Paul Warne was handed an assistant for the day, who joined his coaching staff to help set up the warm-ups before taking a seat at the top table for the post-match press conference.

In conjunction with the Rotherham United Community Sports Trust and LensGo Visuals, the club are proud to mark the EFL’s Day of Action by releasing the video documenting a fantastic day which resulted in a win over Blackburn Rovers at AESSEAL New York Stadium.

Head of Community Jamie Noble expressed his delight at the success of the project and his excitement at the opportunity to showcase a fantastic day for the club’s community wing.

“I am so pleased that we are able to mark the Day of Action with the release of a brilliant production, on what was a superb day for displaying the brilliant relationship between the local community and the football club,” he enthused.

“The feedback we had from the kids was all so positive and it really was an ‘access all areas’ experience, thanks to the wonderfully accommodating first team manager we have here.

“We have recently had Will Vaulks recognised for his community work and I must admit, the bond between the people of the town and the players and staff here is as strong as it has ever been.

“So much of that is down to the manager’s dedication to the town’s people and supporters and the players we have here, who are always more than willing to go out into the community.”

Up and down the country, managers and players from the EFL’s 72 Clubs will also be attending events to pay special visits to participants and turn their hand to some of the activities taking place throughout
the day.

This is just small sample of some of the fantastic work due to take place during the EFL’s Day of Action by EFL Club Community Organisations – the largest network of sporting charities in the UK.

The EFL and its Clubs invested £80m in communities in 2018.EFL Chief Executive, Shaun Harvey said: “The EFL Day of Action brings together all 72 Clubs to highlight the special role they play in enhancing the lives of millions of people around the country.

“The scale of ground-breaking projects across our network of Clubs continues to grow year-on-year
and their delivery is integral to our aims of improving lives in a range of areas including inclusion,
homelessness, education and health.” 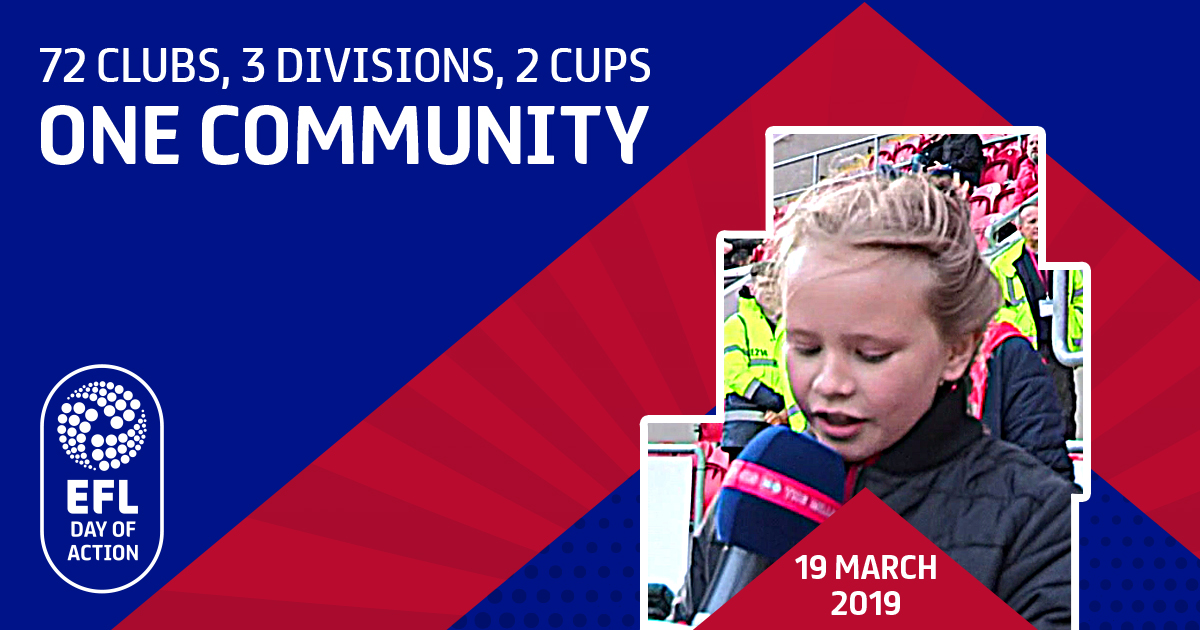