A new study by EY highlights how the Premier League and its clubs have continued to generate widespread benefits for the economy, society and the entire football pyramid, despite the significant challenges presented by COVID-19.

The analysis reveals that Premier League football contributed £7.6 billion to the UK economy during the 2019/20 season, which was suspended for more than three months due to the pandemic. Clubs’ economic activity has grown by 840 per cent since the 1998/99 season.

The appeal of Premier League football to fans in the UK and around the world is evident as the report shows there was a cumulative global audience of 5.2 billion in 2019/20, double that of the UEFA Champions League. Prior to COVID-19 disruption, stadiums were a record 97.8 per cent full across the League.

This on-pitch success enables continued and increased investment into communities nationally and locally, and football at all levels. The League provided solidarity and parachute payments to 138 EFL and National League clubs, with a total of £455 million distributed to other leagues and community football in 2019/20.

EY’s assessment reveals that the Premier League’s total economic contribution remains equal to pre-pandemic levels and the amount generated in 2016/17. This is despite an estimated £1.3 billion loss in broadcast and matchday revenues during seasons 2019/20 and 2020/21 due to Premier League matches being played behind closed doors.

EY UK Chief Economist Peter Arnold said: “In the difficult times we have all experienced throughout the COVID-19  pandemic, football has provided moments of excitement and togetherness for many.

“This report looks at the effect of the activities behind those moments and highlights the significant growth in the League’s impact since EY’s first impact assessment of the League and its clubs in 2013/14.

“The League’s global appeal continues to be a key factor in driving its economic impact, and the League plays a significant role at the heart of clubs’ communities. Hundreds of thousands of children, young people and adults benefit from initiatives supported by the League each year, and the pandemic has helped pull the role of football within communities across the country into sharper focus than ever before.”

Premier League Chief Executive Richard Masters said: “This new report from EY shows how we and our clubs continue to contribute significantly to the UK economy and have delivered much- needed assistance to all levels of football and communities at a time when the pandemic brought unprecedented challenges and uncertainty for so many.

“We are proud of the level of support we provide the football pyramid, as well as funding community organisations of clubs up, and down the country. The importance of their work has been more evident than ever in recent times, providing help to people who needed it the most.

“Our clubs produce exciting, competitive football featuring the best players and managers in the world, which is followed by billions of fans globally and supporters filling stadiums each week. This success and popularity enables us to continue investing  in the competition and provide unparalleled support to the whole game and communities, ensuring the positive impact of the Premier League is felt far beyond what we see on the pitch.”

The economic impact in the capital during 2019/20 was matched by that in the North West of England. Clubs generated £2.1 billion in Gross Value Added (GVA) and 21,000 jobs in both these regions.

This report was commissioned by the Premier League and prepared by Ernst & Young LLP to provide an independent assessment of the social and economic contribution of the League. The report focuses primarily on the 2019/20 season. 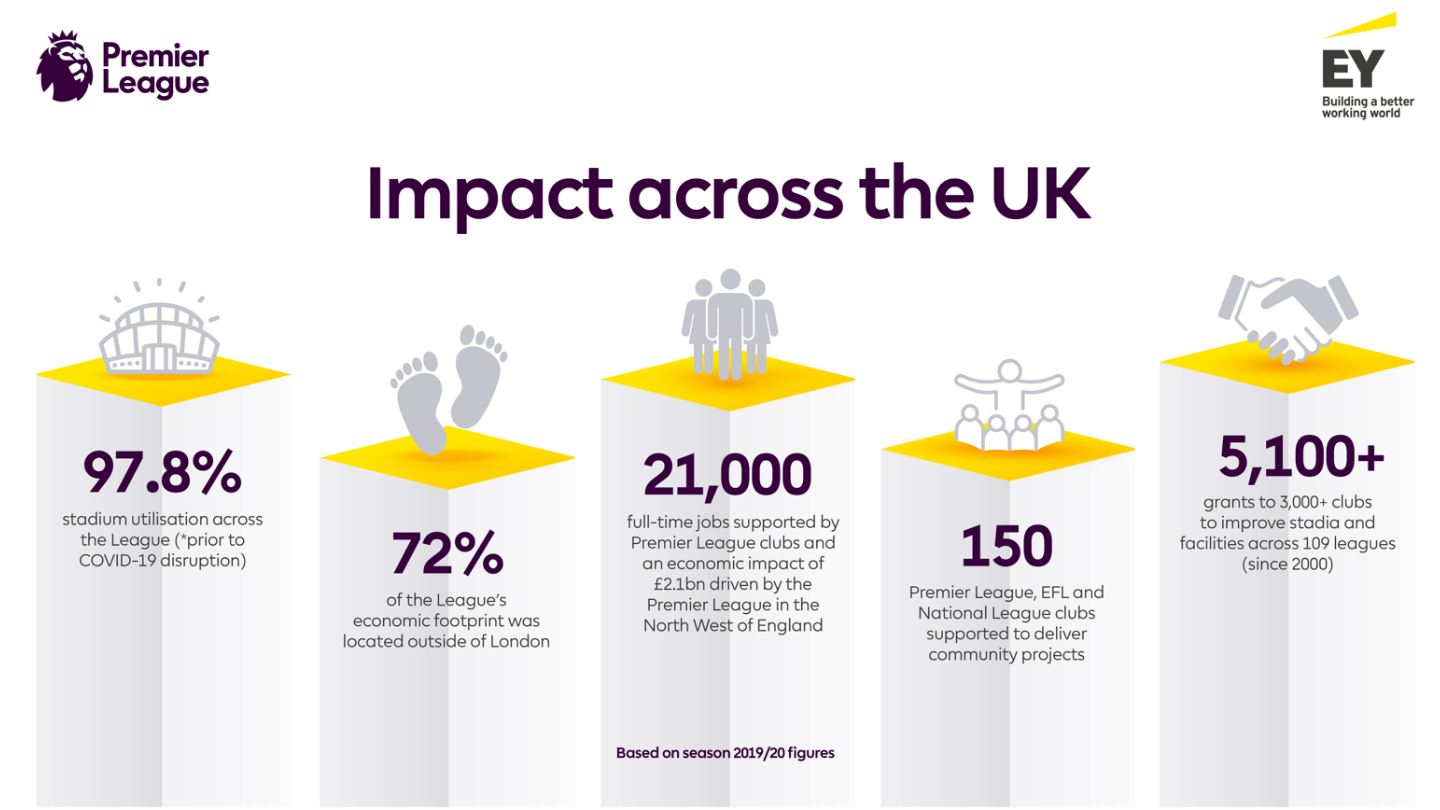