Over 30,000 women and girls have starting playing football in the past two year with their local Football League club (including Rotherham United), a report reveals this week.

The Football League Trusts Female Football Development programme (FFD) is run by 55 clubs across the country including Rotherham United and aims to get women and girls playing the game. Perhaps more importantly the figures also reveal that over 97% of the women and girls who have been introduced to football have continued to be involved.

Nicol Meredith, Female Football Officer with The Football League Trust, comments, “Getting so many girls involved in the programme that are new to football and the massive retention rates shows the power that football clubs have in their communities. The programme focuses on having fun as well as the social and health benefits of playing football. This innovative approach has led to football clubs running brand new activities that appeal to girls who wouldn’t normally be interested in football such as Soccercise and Zumba Fitness Football, which are football based aerobics sessions. ”

The programme is funded by The FA and Sport England and was launched in 2013 to get women and girls aged 14 and over to start, and continue, playing football using the reach Football League Trusts and Premier League to deliver at grassroots. This is the first time that all four organisations have worked on a project of this kind.  It was announced over the summer that due to the success of the first two years of the scheme more than £3,700,000 of joint FA and Sport England investment will be allocated to the programme by July 2016.

Over 700 female participants have taken up football with Rotherham United Community Sports Trust over the last 2 years.

Another success of the programme is that participation among minority ethnic groups in the FFD programme is over 20%. Nicol, continues “Football has an amazing power to break down all kinds of barriers. As well as getting hard to reach groups involved in the game our sustained approach to developing female participation is getting more women in key positions at professional Football League clubs and their Community Schemes. Furthermore with the success of the Lionesses at the World cup, we are looking to capitalise even more on the extra interest that this has provoked and get more girls benefitting from playing football.” 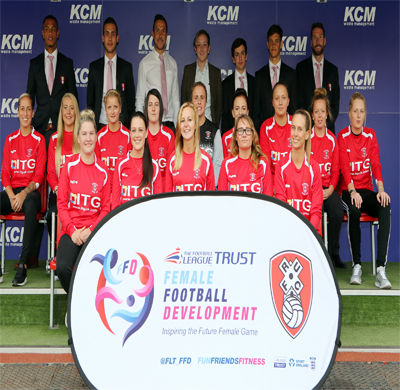