Craige Spencer, Trevor Price and Paul Truin will put their feet to the pedals as they represent the Millers in a journey that begins at Barnsley’s Oakwell Stadium on Friday 3rd June and concludes at the Ajax Arena in Amsterdam.

The trio are all fully immersed in training for the event and have already started their fundraising efforts for the UK’s largest men’s health charity.

Trevor, who is a cycling novice, has had his preparations stalled by an injury last month, but is keen not to let that effect his attempts to raise money for a charity that is close to his heart.

“I started cycling in June and I wanted to do 50 a mile a week and I was doing that. Then, about a month ago, I came off my bike and broke four ribs,” he explained.

“This is the first real involvement I’ve had with cycling. I’ve always had a pushbike but this is the first time I’ve had a road bike since I was about 15. My dad was diagnosed with Prostate Cancer in 2001 and he made a full recovery but it’s a big thing and we need more men to be aware of the disease.”

Meanwhile, Paul boasts experience from previous rides but is relishing the challenge of trading Yorkshire for the Netherlands next summer.

“I started cycling about four and a half years ago,” he told www.themillers.co.uk

“I really got into it alongside my partner who is very much the cyclist now and for the past two and a half seasons we’ve been promoting cycling to the AESSEAL New York Stadium.

“I’ve been affected by cancer in my family, so this is a charity which is one that I am really happy to support.”

Paul and Trevor will have experience to lean on as they embark upon their journey to the Netherlands, with Craige having completed the London to Amsterdam ride alongside Paul Warne in 2014.

“I’m looking forward to taking part in the ride again for this brilliant cause,” Craige enthused.

“It was tough last time but I really enjoyed myself and it’s a thoroughly rewarding feeling at the end of it all.”

You can help the Trio raise money for this great cause by donating directly to their fundraising page – https://www.justgiving.com/paul-rowland-truin.

JustGiving sends your donation straight to PROSTATE CANCER UK and automatically reclaims Gift Aid if you are a UK taxpayer, so your donation is worth even more. 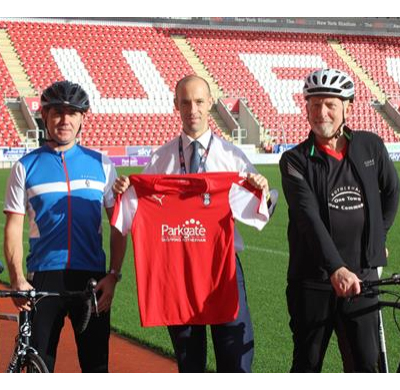